The next troop campout is planned for May 11-13 on the Chesapeake Bay at Point Look Out, Maryland. This will be a great trip and everyone will have a lot of fun. The package will be online by Thursday. Deadline for submitting the forms is May 1.

The campout packet and permission slip is located here under the panning section of the site. 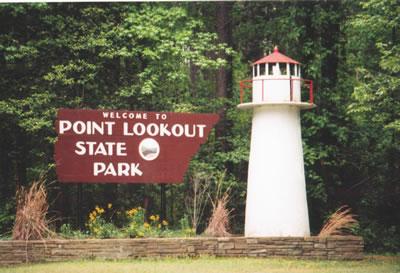 HISTORY: Point Lookout began as part of St. Michael’s Manor, one of three manors owned by Leonard Calvert, the first Governor of the Maryland colony. In the 200 years leading up to the Civil War, it became a popular summer resort, complete with beach cottages, a large wharf and a lighthouse. With the advent of the war, people’s attentions turned away from recreation and the area’s summer resort owners began to suffer financially.

The U.S. Government, needing a hospital to house casualties of the Northern armies, leased the Point Lookout resort; Hammond General Hospital was built and received its first Union Army patients on August 17, 1862. Early in 1863, the authorities ordered a small number of Confederate prisoners confined to the hospital grounds, most being Southern Marylanders accused of helping the Confederacy. Not long after the Battle of Gettysburg, the federal government expanded the hospital’s grounds and built a prison camp for Confederate soldiers. Point Lookout was close to the battlefields yet isolated enough to make escape difficult. The site became officially known as Camp Hoffman, a rebel camp capable of holding 10,000 prisoners of war. Three forts were erected to protect the prison, one of which — Fort Lincoln — still remains.

As the war progressed, additional prisoners were assigned to Camp Hoffman: In September 1863, 4,000 Confederates were being held at the camp; by December, the number had more than doubled to 9,000. By the following June, less than one year after the camp opened, more than 20,000 prisoners crowded the camp.

Point Lookout was used mainly for enlisted men; most officers were sent to Fort Delaware. During the prison’s operation, filth prevailed and wells became contaminated. Men literally froze to death in Sibley tents — rudimentary structures offering little protection from the elements — with but one blanket apiece and very little wood. With money scarce and boredom plentiful, the prisoners learned to occupy themselves making trinkets and many other useful articles out of various materials that were subsequently used for bartering purposes.

At the end of the Civil War in April 1865, federal officials began transferring the Confederates south; by late June the last prisoners were gone. In just under two years, out of 52,264 Confederates imprisoned at Point Lookout, between 3,000 and 8,000 men died.

Today, two monuments honor the memory of the prisoners who died there. The first was built by the State of Maryland and dedicated in 1876. The U.S. Government followed suit, erecting the second monument in the early 1900s. In 1965, 100 years following the end of the Civil War, the Maryland State Forest & Park Service began development of Point Lookout State Park. Today the park comprises 1,064 acres.