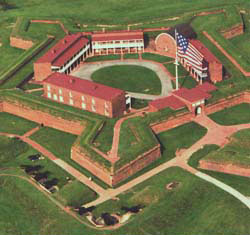 On Saturday, October 20, 2012, we’ll be visiting Fort McHenry, an 18th century star fort located at the entrance to Baltimore harbor.  While Fort McHenry has served our country actively since its founding through World War II, it is perhaps most famous as a site in the September 13-14, 1814 Battle of Baltimore, from which our national anthem, The Star Spangled Banner, was born.  A 34-year old lawyer, Francis Scott Key, who was negotiating a prisoner release on a British warship within sight of the fort, watched the battle during which the British navy launched Congreve rockets against the fort through the night.  In the morning, Key saw that our flag still stood over the fort’s ramparts, and then penned the immortal words of a poem which eventually became our anthem.  Fort McHenry’s defiance against the British Navy earned it its place in history from that point forward.